Four years ago, Ed Williams joined our firm first as Digital Director then as Managing Director. Under Ed’s leadership our firm has grown by 750%, has delivered 156 election victories for our clients, taken home 52 industry awards, and been named to Inc. Magazine’s list of 5000 fastest growing privately held companies in America. Now, Ed Williams will be moving into the role of Senior Advisor, focusing on the long-term vision for this company — and I could not be more excited to announce our new CEO.

Sam Peters has joined McShane LLC in the role of CEO. Sam will be responsible for overseeing the daily operations of our company, our growth, and ultimately the work product we deliver to our clients.

Our former rockstar client, Sam Peters, will be joining us as the CEO of McShane LLC. The McShane team is excited to welcome Sam on board with his years of political experience, his long track record of business success, and his exemplary leadership background in the military.

I first met Sam in 2020, when our client defeated him in a Congressional primary — eager to keep fighting for the conservative movement Sam, was elected to the Board of the Clark County Republican Party, and founded and ran LELPAC, a political action committee, supporting pro-law enforcement candidates. 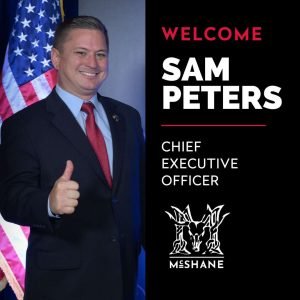 Then last year, Sam decided to run for Congress again and hired our team. Sam won his primary this time and went on to run one of the best campaigns in the country outperforming candidates in much more Republican districts. In the two years I served as his lead consultant, I saw not only one of the hardest-working candidates I’ve ever met but also a man of integrity who truly believes in conservative principles.

In those two years, I also learned more about Sam’s background as an executive and entrepreneur who started and grew multiple successful businesses, as well as his leadership as a decorated military officer. When the time came for a CEO — the choice for me was clear, Sam Peters.

Two years ago, Rory McShane and his team defeated me in my primary election. While I’d heard about this heavily tattooed, brash political pitbull, when we met for the first time on primary election day I was surprised to find we laughed together for a couple of hours — despite hoping to defeat each other electorally. After the election we met for lunch, and Rory told me exactly how his team defeated me using data — I was intrigued and soon after hired them for my next campaign. In the two years I was a client of McShane, I saw a team work around the clock for me, make data-driven decisions, and truly fight for the conservative movement. I also watched them grow as a business — with Rory frequently joking that he was a terrible businessman and that if it were up to him, he would take on every client for no fee and be broke in a month because he loves his job.

Taking on the role of CEO, I’m excited to bring my experience in managing and growing business to the conservative movement — and to help achieve more victories throughout the country.

Read about Sam Joining McShane in Campaigns and Elections