McShane in Yahoo News: The Republicans are beating Democrats on Facebook, but by how much? 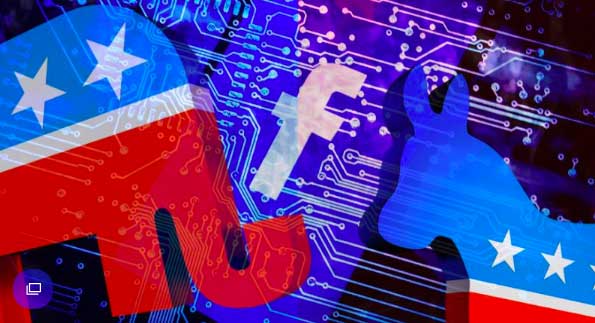 After President Barack Obama’s reelection in 2012, political journalists wrote an armada of stories about the brilliance of his online campaign. Obama’s nerds were hailed as geniuses for harnessing big data to create precise models of which voters they needed to reach, and of using cutting edge methods to get them to the polls. They helped boost African-American turnout in the key swing state of Ohio from 11 percent of the electorate in 2008 to 15 percent in 2012.

Yet just four years later, when Donald Trump won a surprise victory in the 2016 presidential election, the storyline — somewhat predictably — emerged that his technology team had created a modern-day Manhattan project for targeting voters on Facebook. In the ensuing two years, progressives have lamented that Democrats now lag behind Republicans in using data and digital tools to win elections.

The truth usually lies somewhere in the middle, according to political consultants and analysts who have worked in social media for years. Yet there does appear to be some indication that Democrats failed to capitalize on some of Obama’s early successes online.

“I think there was a misunderstanding of the fundamental ways that Facebook had changed. … There was a certain amount of complacency, to be frank,” said Cheryl Contee, CEO of Do Big Things, a digital marketing and advocacy firm, who has previously said that progressives are “10 years” behind in this area.

It’s crucial to point out that Facebook engagement is one part of a much larger universe of digital tools and tactics that campaigns can employ. And even in this realm, there is nuance and complexity that makes it hard to conclude that one campaign did “better” than the other.

What is clear is that Clinton and Trump had different goals on the platform, and that’s where critics can question strategic choices.

A Facebook white paper said that Trump outspent Clinton on Facebook $44 million to $28 million, though former Clinton campaign aides dispute they were outspent. And the Trump campaign and RNC created more ad variations than Clinton, through which they tested voter responses to their content. One white paper by a Facebook executive reported the ad variation disparity to be 5.9 million for Trump to 66,000 for Clinton. But a Bloomberg article weeks before the election reported the gap to be much smaller but nonetheless significant, at 100,000 for Trump.

Those numbers do show a heavier investment in a certain type of engagement. The Clinton campaign, however, says that the majority of Trump’s money spent on Facebook was to raise money, and that it invested more money in other types of fundraising that it says were more efficient and had a higher rate of return. And Clinton did end up distributing more sponsored posts than Trump on Facebook.

As for the ad variations, Clinton’s people say they devoted much more energy than Trump to figuring out how to persuade undecided voters on Facebook to support Clinton. The Clinton argument is that they weren’t just speaking to people they knew were supporters, but that they were trying to find new voters on the platform.

That strategy may have been a strategic mistake, however.

“There’s not a lot of evidence that when you’re trying to change someone’s mind about who to vote for or whether to vote, digital is a great platform on which to do that,” said John Hagner, a partner at Clarity Campaign Labs, a Democratic analytics firm.

Keegan Goudiss, digital advertising director for Bernie Sanders in 2016, told Yahoo News that social media can be an effective part of a larger persuasion strategy if it is employed early in a campaign to help move the debate to certain issues and to frame the way those concerns are discussed. “That’s a high-level approach for digital that does work for persuasion,” Goudiss said.

Goudiss said he thought Clinton’s team did many things well but was “too cautious” with its messaging for much of the campaign, because they were focused on avoiding mistakes rather than firing up supporters. Politics on social media, Goudiss said, requires candidates to be sharper edged and to be “more willing to talk about ideological extremes.”

“Red meat is important if you want to get people interested and excited,” he said. “The politician with a jacket over their shoulder is not going to work. People aren’t going to buy it.”

Facebook is good at confirming bias and reinforcing tribal instincts. This can also be described as “community building” by digital operatives, and Rory McShane, a Republican strategist, said that “it didn’t seem like [Clinton campaigners] were focused on community building.”

Of course, Hillary Clinton was perhaps not the most inspirational figure for an online community. And the Trump campaign also used Facebook to aim ads at potential Clinton supporters in order to discourage them from voting, even going so far as to tell reporters they were mounting “three major voter suppression operations.”

Some of it appears to have been luck on Trump’s part. His digital operation was initially overseen by a political novice, Brad Parscale, whose most relevant experience had been in building and designing websites for businesses like Trump’s wineries. After Trump became the nominee in the summer of 2016, the RNC stepped in and professionalized the campaign, taking over most aspects of its execution.

“[I’d] never run a campaign before. Well, I’d run a campaign, just never a political campaign. Lots of product campaigns, which are different. So there were a lot of gaps,” Parscale, who is now the campaign manager for Trump’s reelection effort, said recently.

“For experts on selling digital who are not political, the approach is you find your segment of the market and you pound the market until you get what you need. That’s a great way to get 40 percent of the vote,” said Hagner, the partner at the Democratic analytics firm.

Steve Bannon, the former head of Breitbart, the right-wing media organization, also had a significant role in the Trump campaign. He had seen Facebook’s power over the previous years, having helped build Breitbart’s reach through the network.

Bannon was also, before he joined the Trump campaign, vice president of Cambridge Analytica, the digital firm that was discovered after the election to have improperly acquired personal data on Facebook of 50 million users, and helped the Trump campaign target those voters.

For much of the past few years, on the other hand, Democrats were underestimating Facebook, said Kelly Vingelis of Revolution Messaging, the digital firm that worked with Sanders’s campaign.

“My belief is they have not given Facebook enough credit in the past because it’s just a place where people go to share pictures of their baby or their wedding. But it’s where people go for hours a day to get online news or engage with online communities,” Vingelis said in an interview. “People, no matter their age, are heavily invested in Facebook, so Democrats have underestimated that and need to catch up.”

“I think Facebook has always been considered a relevant platform but not the hot platform for advertising because there’s a belief you can reach people on other platforms in the same way, which is not correct,” she said.

The 2016 election was a wake-up call that Democrats can’t overlook Facebook, Vingelis said. “Facebook is the No. 1 platform for reaching people and having a conversation,” she said. “Democrats are starting to use Facebook more and use it for engaging in conversation. I’m encouraged by that, but we still have a long way to go.”

But Hagner cautioned against overhasty conclusions from one presidential election. “A lot of progressives are seizing on the fact that Trump spent a lot on digital and won, and thinking they won because of that, and they assume the solution for Dems is to copy that. It’s the old trope that winning campaigns did everything right and losing campaigns did everything wrong,” he said.

On data and analytics, Hagner said, Democrats are still as good if not better than Republicans, especially since Republicans continue to see campaign voter contact results being split between the RNC’s database and the list built by the Koch brothers.

In the 2012 election, Obama’s team famously used Facebook to target friends of friends. It was part of an overall strategy of empowering supporters to build local communities to mobilize for Obama. But after 2012, Vingelis said, “it changed from being a social media network to being an advertising platform.” In addition, Facebook lost some of its appeal as a cool or cutting-edge platform as the user base skewed older and more conservative over time.

Nonetheless, a few things contributed to a drop-off in Democratic performance after 2012. While Republicans were hell-bent on catching up for four years after 2012, Democrats had a certain amount of apathy about remaining innovative.

Some think the departure of much of Obama’s top talent into the private sector played a role.

And Obama’s focus on building up Organizing for America rather than the Democratic National Committee led to what some — including Clinton herself — thought was a decline in the DNC’s operation. This is likely part of why Democratic candidates at the local level have not benefitted from the innovations that went on in Obama’s campaigns, leaving a void that groups like Tech for Campaigns (TFC) are now trying to fill.

“There’s a lack of shared infrastructure for digital, which is what we want to build,” said Jessica Alter, co-founder of TFC, which connects technology professionals with smaller campaigns to help bring their digital and web presence up to speed.

Alter started the company, which does not charge for its services, in 2017 after Trump’s inauguration. But she quickly saw that state legislatures were a highly neglected area of politics.

“No one was helping them, and they’re very important,” Alter said. “Whether you’re giving time or money or skills — unless you’re maybe the biggest donors — state legislatures are the biggest return on investment you can get.”

Another big critique of Democratic campaigns is that they are not spending enough money on digital targeting, because too many Democratic operatives and consultants are either stuck in the past and think TV is the dominant platform, or because they have a vested financial interest in continuing to garner the big fees that come with television advertising. (This debate has existed on the Republican side for years as well.)

TV can still be influential in a race where voters don’t know much about the candidates or the issues, unlike in a presidential campaign, when the candidates are well known by most voters and are defined more by the daily news cycle than by paid advertising. In addition, older demographics vote more reliably, and many of these voters still watch a lot of TV.

In federal and statewide elections, TV can still play a large role, but many candidates in smaller campaigns can’t afford TV, nor would it be an efficient use of resources. For them, digital may be a smart investment, especially now that Facebook and Google make it easy to target voters even at a smaller scale.

The challenge, Hagner said, is a lack of evidence for how digital campaigns move undecided voters toward a candidate. What will ultimately help Democrats figure this out, he said, is not the tactics or digital tools, but finding more dynamic and inspiring candidates.