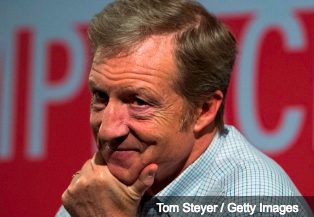 California billionaire and political activist Tom Steyer may be getting more press for his efforts to impeach Donald Trump and flip the House to the Democrats, but his less-noticed plays to advance environmental goals in western states could end up being more successful.

The projects represent a continuation of the political donations and ballot initiatives that formed the backbone of his earliest years in political activism, namely, aiming for increased renewable energy use to combat projected future damage from climate change.

Steyer’s work in Colorado, Nevada, New Mexico, and Arizona could potentially reshape the political landscape in those states, while making major changes on energy policy—especially if the predicted Democratic landslide takes place during fall’s midterms.

Colorado’s House of Representatives has been in Democratic control for a number of years, but Republicans have held on to a slim one-vote majority in the senate since the 2014 elections.

Steyer hopes to tip the Senate back to the Democrats. When Democrats held the state house, senate, and governor’s chair in 2013, they used those majorities to narrowly pass controversial restrictions on guns.

With current governor John Hickenlooper term-limited out of office, the governor’s race is open, and has already seen a number of high-profile shakeups.

The favorite to win the Democratic nomination is Rep. Jared Polis, whose environmental goals are to the left even of Steyer. Polis, one of the ten richest members of Congress, is promoting a proposal to make the Centennial state’s energy production 100 percent renewable by 2040.

“Working to move our state to 100 percent renewable energy, that push isn’t going to come from Washington with President Trump pulling out of the Paris accords and with continual giveaways to the fossil fuel industry,” Polis said in August of last year.

Pollster Floyd Ciruli said the stars over Colorado appear to be aligning for Steyer.

“I think [Steyer] sees two things that make a difference now in Colorado: number one, Clinton having won it by about five points, and so consequently, a general sense that the state is flipping a bit into the Democratic camp,” Ciruli told the Washington Free Beacon.

While Steyer is connected most closely to NextGen America, his work with the League of Conservation Voters (LCV) is equally important. While the group does not reveal its donors, Steyer is the major force behind the national organization that has numerous state-based chapters.

As is the case with Colorado, the New Mexico governor’s seat is up for grabs thanks to term limits. Steyer and his wife set the table for unified Democratic control in the state by donating $65,000 in 2016 to a select number of local candidates for the legislature. Democrats had regained majority control of the House.

A Republican is leaving the governor’s seat, which has Steyer’s attention, according to an internal memo from LCV originally published at Politico.

As with the previous two states, the current governor of Nevada is term-limited. The LCV sees Nevada as another key state for environmentalists.

“Current Governor Brian Sandoval has been on the right side of many environmental issues, but has refused to go the distance in the climate fight,” the memo noted. “Nevada’s pro-environment legislature made real progress in 2017, but electing a stronger governor will give the state a chance to increase the renewable energy standard and retire their remaining coal plants.”

A legislator who had received donations from Steyer sponsored a bill to ban fracking in 2017, but the bill did not advance past committee.

Political analyst Rory McShane said Steyer’s money is helpful in getting a politician elected, but that Steyer risks overplaying his hand.

“Obviously there are a lot of opportunities for Democrats on the ballot, and we’ve got an open governor’s race, and he’s obviously playing in the legislative races,” McShane said. “But even if you get Chris Giunchigliani or Steve Sisolak in the governor’s mansion, and he’s made some hefty contributions to them, are they necessarily going to do the bidding of his environmental agenda? I don’t think the answer to that question is ‘yes.'”

A Steyer-backed group just filed paperwork this week in Arizona to begin a signature drive for a ballot question to raise the state’s renewable energy standard.

The current goal is for the state to derive 15 percent of their power generation from renewable sources by 2025. But the ballot question Clean Energy for a Healthy Arizona will shoot for pushing the ratio up to 50 percent by 2030, a major increase with only a few extra years to spare.

National politics will almost always keep the biggest spotlight, but other liberal-minded donors and strategists have seen the value of going small.

The Atlantic profiled Colorado billionaire Tim Gill in 2007, focusing on his below-the-radar effort to reshape state legislatures. Gill was a member of the “Gang of Four,” a group of multi-millionaires in Colorado who decided to generously fund an effort beginning in 2004 to shift a state that was largely Republican at the time to one that leans Democratic. Polis was another member of the gang.

After seeing broad success with his efforts in the 2006 elections, Gill called the lure of giving to national candidates, instead of local ones, “glamour giving.”

Other examples of large donors looking at smaller races would also include the recent focus by George Soros on smaller district attorney races across the country.

Thomas Pyle, president of the American Energy Alliance, believes Steyer has made some mistakes in the past, but that he may be learning from them.

“He’s been spending some money in some states, he’s been driving some change, and forcing some green-type issues in some of these western states,” Pyle said. “I’m more worried about that than I have been in the past with him.”

Neither NextGen nor the League of Conservation Voters returned a request for comment on efforts in these states.