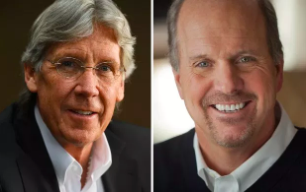 WASHINGTON — Drawing upon their personal wealth, two candidates in Colorado’s race for U.S. Senate have dominated the spending in the five-way fight for the Republican nomination, more than doubling the combined amount paid by their three opponents for television ads, yard signs and other campaign expenses.

Together, businessmen Robert Blaha and Jack Graham have spent more than $1.9 million through June 8, about twice the roughly $882,000 paid by rivals Ryan Frazier, Darryl Glenn and Jon Keyser, according to federal fundraising records. Graham is expected to purchase at least $1 million on TV ads before the race is done, according to his campaign and media trackers.

With less than a week before the June 28 primary, however, it’s an open question how much a big bank account and business pedigree will help Blaha or Graham — especially in a race as unpredictable as this one.

Public polling has been minimal. Name ID among all the candidates remains low, said several sources inside and outside the race. Meanwhile, Glenn — the least-funded candidate in the primary — has gotten some last-minute support from U.S. Sen. Ted Cruz and the Senate Conservatives Fund, a major political booster founded by former U.S. Sen. Jim DeMint of South Carolina.

On Thursday, Glenn added to his cavalry charge by notching an endorsement from conservative writer Erick Erickson. “Give what you can, pray as you can, and if you live in Colorado you need to vote for Darryl Glenn,” Erickson wrote.

There’s also the question of how much money is enough to make a difference in a statewide race. While Blaha and Graham have outpaced their rivals in spending, the amount of money they’ve expended is not so much that either has gained a clear advantage, although the extra cash still could be enough to eke out a win depending on how many voters cast a ballot, said one Colorado Republican strategist.

“The dynamics of this race have shaken out in such a way where (the election) could be for sale,” said Mike Fortney, a GOP operative not working for any of the five campaigns. “But how much of it is for sale is going to depend on turnout,” said Fortney, who added he expected turnout to be low. “So their message may have fallen on deaf ears.”

Notably, Graham — who made his fortune in the re-insurance industry and is worth at least $29.3 million — has infused his campaign with $1.5 million in personal cash, with $500,000 of that coming June 8, the final day of the latest reporting deadline. That adds to the roughly $465,000 he has raised this cycle, the most of any candidate.

At least $1 million of Graham’s warchest is going to TV ads on cable and broadcast stations, which outpaces even Blaha. Media trackers watching the race estimate Blaha is spending $395,000 to $685,000 on television, which includes one ad — that opened with an exploding toilet — that first aired Jan. 17 during the Denver Broncos’ playoff game against the Pittsburgh Steelers.

Unlike Graham, Blaha isn’t simply writing checks. The $1 million Blaha has steered to his campaign comes from two loans, worth $400,000 and $600,000, which he received from Integrity Bank & Trust, the bank he co-founded. He did not disclose what, if any, collateral he used to secure those loans.

“Things are good,” said Blaha, who holds assets between $2.3 million and $8.4 million. “Got a few final events, a few things to get wrapped up. A lot of commercials to finish running and a lot of radio to do. And then we sit, and we wait.”

Glenn, meanwhile, is relying on the support of the Senate Conservatives Fund, which is expected to spend an estimated $275,000 on TV and radio for him and has helped him raise about $96,000. That’s critical, because Glenn netted only $137,000 in contributions through June 8, according to the fundraising report he filed to the Federal Election Commission.

No one on his staff is paid. “Everybody is a volunteer,” Glenn said.

Rory McShane, who served as Gessler’s campaign manager, said the team spent about two years putting together what he called a “world class” field operation to get voters to the polls. But he said Gessler was outspent on TV and that made the difference.

“At the end of the day how much money you are putting on TV is a deciding factor,” said McShane, who now works for the political firm RedRock Strategies. “There are only so many phone calls you can make and so many doors you can knock on, and you need that bullhorn.”

Frazier, who had about $20,000 on hand on June 8, said he hopes this year is a different story. “No amount of money can replace the sweat equity of bare-knuckled campaigning,” said Frazier, a former Aurora City Council member.

He said his campaign is focusing its energy on making calls to individual voters, which often leads to Frazier making one-on-one pitches.

“I get a list every day of voters who want me to call them back,” he said. “And I call them myself. Sometimes you spend 20 to 30 minutes talking to someone who really cares about this country, and that’s OK.”