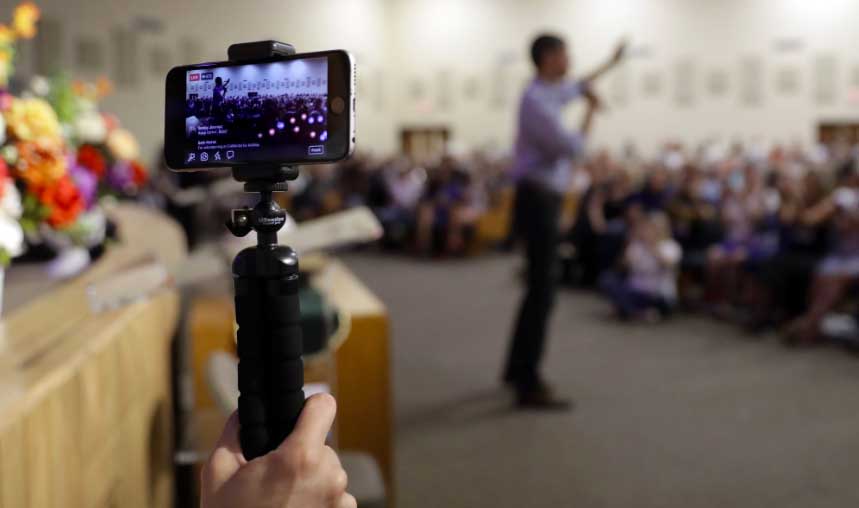 By WILL WEISSERT
Published September 7, 2018

AUSTIN, Texas (AP) — Most ardent supporters know where Beto O’Rourke stands on single-payer health care (he’s for it), legalizing marijuana (ditto) and a border wall (against). But anyone watching his Facebook Live feed as the Democratic Senate candidate tossed wet laundry into the dryer on a recent Sunday learned a far more intimate detail.

“Somebody asked, ‘Boxers or briefs?’” O’Rourke said holding up a wet, gray undergarment for the cellphone camera at a South Texas laundromat. “These are like boxer-briefs.”

In his bid to upset Republican Ted Cruz, O’Rourke livestreams constantly, highlighting how the technology has created scenes once unthinkable for candidates seeking national office, but is nonetheless increasingly popular among underdogs desperate for attention. Then little-known New York Democrat Alexandria Ocasio-Cortez broadcast from public transportation, an unsuccessful Georgia Republican gubernatorial candidate evoked mermaid tales, a Michigan Democrat ran through the streets looking for last-minute supporters and a California congressional hopeful was on Facebook Live when she barged into a Denny’s bathroom.

Candidates have long livestreamed rallies, debates and question-and-answer sessions. But doing so at near junkie levels defies the increasing tendency among most top politicians to control all contact, from screening who attends public rallies to avoiding interviews with “unfriendly” media outlets.

For those facing uphill fights like O’Rourke, using Facebook Live is an easy way to get free media and make low-stakes connections with voters. It’s also fitting in the era of President Donald Trump, who is fond of shooting unfiltered thoughts directly to supporters at all hours — but uses Twitter.

“It shows the real person and, if that’s a good thing, that’s good for the candidate,” said Bill Jasso, a public relations professor at Syracuse University. “But campaign managers want to manage, and it’s very tough to control live because there’s no pause.”

Obvious dangers are misplaced curse words or offensive remarks. Also, anything that feels staged can alienate voters. Jazmina Saavedra lost her House bid despite causing a livestream stir by broadcasting forcing her way into a Los Angeles Denny’s bathroom because she said there was a man in the women’s room.

Still, Rory McShane, a Republican consultant who organized Facebook Live sessions with past candidates in South Carolina and Virginia, said he’d like to see more politicians scrapping traditional scripts, even though he’s “hurting myself as someone who writes those messages.”

“I’ve encouraged clients of mine to do full campaigns on livestream from the time you’re brushing your teeth to the time you’re going into your hotel room,” McShane said.

O’Rourke eats and jogs on Facebook Live. He’s gone bowling and gotten haircuts, offered Beatles trivia and skateboarded. Once filming while campaigning in remote West Texas, O’Rourke discovered two lost Labradors and urged their owner to “light me up on the livestream” to arrange a pickup.

Asked if this was vanity gone wild, O’Rourke said, “If you’re seeing too much livestream, turn it off by all means.” But in a state where a Democrat hasn’t won a statewide race since 1994, “We can continue to run the same campaign the same way and turn up the same result” or “we can make this about the people. As many people as possible in as many formats as we can.”

There have been some problems. O’Rourke said he supported instituting a year of required public service for young people, only to later recant. Cruz has made attack ads out of O’Rourke’s frequent use of the F-word on livestream.

But Suneel Gupta, who lost Michigan’s Democratic congressional primary despite frequent Facebook Live sessions — including jogging in search of would-be voters as polls closed — said misstatements shouldn’t be a risk for fervent live-streamers.

“If you’re being yourself consistently, then you don’t have to worry too much,” Gupta said “Because you were yourself the entire time.”

O’Rourke’s sessions are generally watched by hundreds live, but that climbs after they’re archived online. More than 36,000 people have since seen the laundry session, not all happily.

“He’s on there folding laundry now?” asked Kristine Shafer, an O’Rourke supporter in Austin. “Why do I have to watch him do that?”

But Facebook Live presents some bizarre and sometimes wonderful, behind-the-scenes corners of politics. Clay Tippins, an ex-Navy SEAL and failed Georgia gubernatorial candidate, did an all-night livestream and told a story about his wife turning up with Snickers bars and Gatorade during a 3 a.m. Navy water training session. She was mistaken by his delirious compatriots for a mythical sea creature.

“Sir, a mermaid comes out of the water in the middle of the night,” Tippins recalled being told.