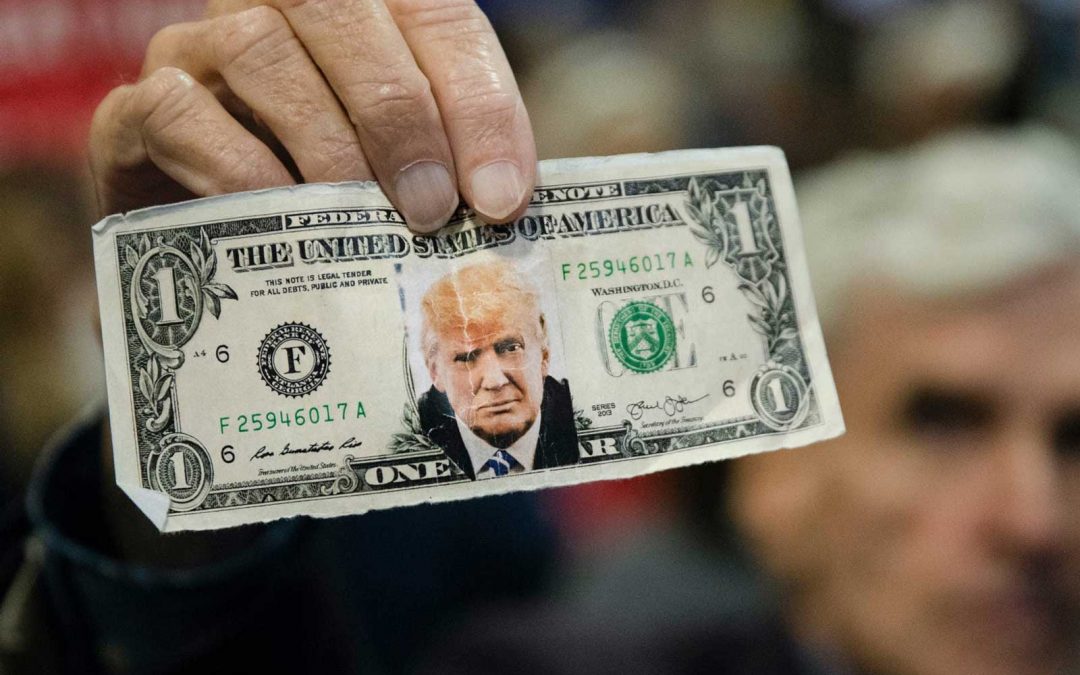 Sorry, Biden backers. President Donald Trump is not running out of campaign cash.

Trump’s overall reelection effort remains flush with 53 days until Election Day, particularly when compared to where it stood around this time four years ago.

This all, despite notable speedbumps, including big-dollar donors disappearing, an internal audit into questionable spending, and Republican handwringing in a recent New York Times article and other publications over Democratic nominee Joe Biden’s recent financial surge.

The Trump campaign ended July with more than $120 million, compared to about $99 million for Biden. For Trump, that’s about three times more than the roughly $39 million it reported at this point in 2016, an Insider review of Federal Election Commission records indicates.

Similarly, the Republican National Committee ended July with about $110 million in reserve, compared to about $33 million for the Democratic National Committee. The RNC’s stash is more than three times the $34.5 million it reported at the same point in August 2016.

And while Biden’s strong August fundraising has indeed diminished the Trump campaign’s long-standing financial lead, neither campaign appears in jeopardy of running out of money, no matter how aggressive its 11th hour spending gets, prominent Democrats and Republicans both acknowledged in interviews this week.

President Donald Trump enters the BOK Center in Tulsa on 20, 2020 for a rally. His campaign remains flush with cash 53 days until Election Day REUTERS/Leah Millis

‘You can never have enough money’

Official figures for the full month of August, including cash on hand numbers going into September, are due to the FEC on September 20.

“We are confident that we will have the resources we need,” Republican National Committee spokesman Michael Ahrens told Insider. “It takes early investment and a lot of time to build a strong data operation and field program. The Democrats do not have either, and all the money in the world won’t fix that.”

“You can never have enough money, and you always want more,” said Matt Gorman, vice president of Targeted Victory, a digital marketing firm with numerous Republican campaign clients. “But Trump, he doesn’t need unlimited money to get in front of voters. The key is to spend it smart.”

Parscale is facing criticism — and even a federal complaint brought by the nonpartisan Campaign Legal Center — for his management of the Trump campaign’s money.

Ed Rollins, chairman of the pro-Trump Great America PAC super PAC, accused Parscale of spending like a “drunk sailor” in this week’s New York Times story. The article also cited Trump campaign staffers expressing concerns about a “cash crunch” in the final weeks before the election after burning through its money on expensive Super Bowl ads, fundraising fees, pricey consultants, and other seemingly frivolous expenses.

Under Stepien, Trump’s campaign scaled advertising among other expenses in August, relying heavily on the norm-shattering, infomercial-like Republican National Convention and surrounding hoopla to fill the void until Labor Day, when it planned to boost spending.

Trump also benefits from endless “earned media” — news coverage, punditry, and cable talk show chattering about his latest press conferences, pontifications, and tweets. This doesn’t cost Trump’s campaign anything, and Trump enjoys a decisive earned media advantage over Biden, according to an August study by marketing firm What If Media Group.

In the campaign’s final weeks, expect the Trump campaign to double down on its early spending in battleground states, such as executing a robust get-out-the-vote effort, said Rory McShane, a Republican political consultant whose firm works with several dozen GOP political committees.

But for the COVID-19 pandemic, Trump and Biden both would’ve been criss-crossing the country much more this year, likely staging an unending string of rallies and campaign events.

Instead, both campaigns aren’t spending as much money on some of the traditional trappings of a general election presidential campaign as they would in a United States free of an out-of-control deadly pandemic.

Even in the unlikely chance Trump’s team blows through its reserves in a final scramble for four more years, it has a not-at-all secret weapon: Trump himself.

During Election 2016, Trump fortified his campaign with more than $66 million of his own money.

This time, Trump, who hasn’t personally spent a dollar on his reelection bid, says he will if he must. It could come in the form of a loan or candidate contribution.

But “we don’t have to,” Trump said Tuesday.

Trump, as he did in 2016, could also launch a gimmicky campaign donation incentive promotion, where he contributed a dollar of his own cash for every dollar other people gave, up to a certain cap.

Additionally, there are several super PACs actively promoting Trump and bashing Biden, largely via television and digital advertisements. America First Action, the most prominent of these super PACs, entered August with more than $26 million cash on hand.

Like its super PAC brethren, American First Action is animated by the Supreme Court’s 2010 Citizens United v. FEC decision and empowered to legally raise and spend unlimited amounts of money. A wealthy Trump donor wishing to give it a seven- or even eight-figure contribution between now and the election is free to do so.

While taking joy in the president’s campaign’s financial foibles and believing Biden will win, some Biden advocates acknowledge that Trump isn’t about to go broke.

“We’ve been outraising and outspending Trump’s super PAC but our expectation is and always has been that Trump and his allies will have as much money as they need in this election,” Priorities USA Action spokesperson Eliana Locke said. “Joe Biden is going to win because he’s the better candidate, not because he can now spend more money.”

Added American Bridge 21st Century spokesman Max Steele: “As Democrats have made clear this entire cycle, no matter what the polls say or how much we raise, we will run like we’re behind until every vote is counted.”

Biden campaign spokesperson Rosemary Boeglin said her team doesn’t “take a single penny for granted” and will be “spending smartly and strategically to bring new voters into the Biden coalition and energize our broad base of support.”

Biden himself texted supporters Thursday afternoon to warn of the president’s financial strength.

“Trump is rapidly scaling up his campaign — raising tons of money and holding non-stop event,” Biden wrote, before asking backers to “rush $12 to the campaign to help share our message with voters” during the next eight weeks.